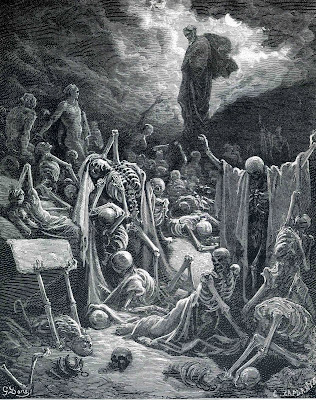 In all stories of the afterlife there are always some unfortunate souls that never find peace. They are stuck in the underworld, limbo, purgatory or what have you. In jackalopes all souls must travel though the underworld to find peace. Some souls, however give up and stays in the underworld forever. They build little cities and settlements, the largest being the city of the dead by the dead sea. We do not visit it in the first book, but it is mentioned and will be quite important. A settlement we do visit is the small village of Oaohnan, between the first and second pylon of the underworld.
Here is how it and its most immediate surroundings is described in the text:

It was a tiny village in the middle of nowhere, but Scrivens told Jane that small settlements like this arose naturally as souls stopped to help each other on their long journey through the underworld. However, some souls gave up and stayed in the village forever. Jane took a closer look.
The middle building was shaped like a K, there was no other way to describe it.
It was like a tall black tower with two supporting pillars made from white oak built haphazardly around it. The rest of the houses were made out of stone and much wider than they were tall. It seemed like everyone lied down when indoors. Redélf had not returned ye, but his scribe gave Scrivens, Jane and Marvin two rooms to spend the night in.

The wood was a collection of trees, growing from thin air near the horizon. Actually it seemed like there was originally only one tree, but it had been broken into several pieces and now floated as a collection of hollow puzzle-pieces. Beyond the forest and the swamps a shadow was moving, seemingly blending into the surrounding fog.

Together, Jane and Scrivens left the rocky surroundings of the first pylon and entered a new part of the underworld. The terrain changed from cold and dark stone to green rocks and red skies. The second pylon was the closest to hell and well protected. Many jackalope guards were stationed on the side of the road and in some places deep trenches and walls were erected.
"The only dangerous part we will actually pass is the crystal caves, due to the acidic pools within. They are a melted form of the metal the valley of scissors up ahead is made out of and they can destroy the soul itself!" Scrivens explained.
Jane shivered. Her most vivid memory when traveling through the underworld for the first time was from the valley of scissors. One of the shades in her group had started to go mad, accusing the others of keeping it down and even selling it out to the demons. The shade had eventually left, and the next day they had found it all cut into tiny wriggling bloody pieces by the giant scissors of the valley.

While helping the village Jane inspires a priest to continue his travels through the underworld. He re-appears near the end in a cameo. Actually the priest is a cameo of Billiam, a minor character from my second and third book (Super Power and The Mushroom-shaped Giga Ship and The Book of Digging Forth Today, respectively). Actually, a lot of my old characters like Billiam, Reynald, Fred, Hermeline, Timothy, James and Angie appear as unnamed cameos (so I guess they all died?). Vincent Wolf makes his contractual cameo as well! The name of the village, Oahnan, is taken from the very first man who according to the bible performed a Coitus interruptus (also known as the pull-out method)! The reason I chose that name is I wanted a ancient sounding name that nevertheless allowed me to do masturbation-jokes about it.