The first jackalope is almost finished! Well I say finished, but there are still quite a bit of artwork and editing to do, but the three hundred pages I am aiming for are more or less done. You may wonder how this is possible, with only five chapter on this webpage? Well, that is because I recently figured out a new plot-twist, vastly better than the one I originally had planned. This means that much of the old chapters have to be rewritten. But do not worry, for the entire thing will eventually be available free of charge on my website, just as promised.

After writing jackalopes for so long the word "pylon" has almost ceased to lose all meaning, so I thought it would be good for both you and me to relearn about the Egyptian mythology that inspired me to write this story. My initial aim was two-fold; to create a story with almost only female characters (or at least females in the majority) and to create an afterlife that was as depressing as possible. Not that the Egyptian afterlife is that depressing, but it DOES feature a walk among the untold dangers of chaos (and that is before you even get to the final judgment). If you had not memorized (or better yet, were buried with) the proper steps and spells to make it through the underworld you were pretty much fucked. The worst to an ancient Egyptian was the cessation of existence, even the bleak underworld or eternal torture were preferable to that. A central image were the pylons of the underworld which in my story are reimagined as safe havens for wayward souls. 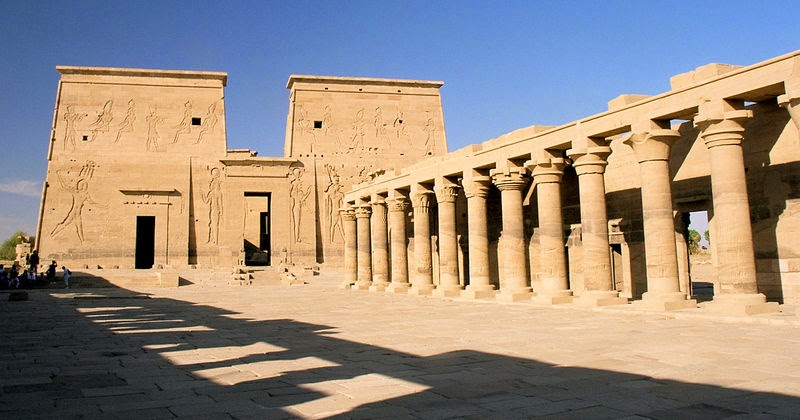 An Egyptian pylon, with two main columns and a central entrance. Notice the road of pillars that precede it. 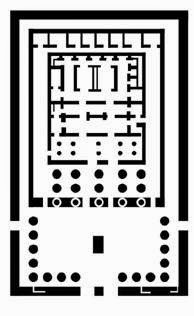 A layout of an Egyptian tempel, the small collections of rooms in the upper part of the picture was said to house the god of the temple and was used for various rituals. The big room down below was like an antechamber of sorts, and the only part accessable to people that were not priests. 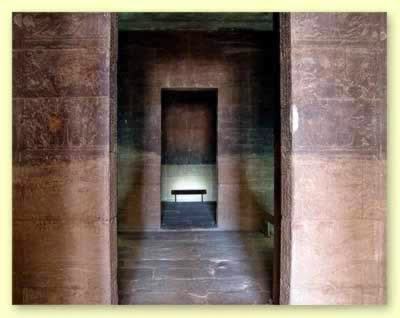 The inside of one of the inner temple rooms. What at first glance appears to a bench in the back of the room is actually used for some kind of offering.

While writing this story I also wanted to insert some Christian elements. It is my intention that the jackalopes, souls that return to the underworld from heaven to help the shades reach paradise, is a symbol for those that are already saved and work diligently to preach the gospel! What then, does rabbits have to do with this. Why Jackalopes? Well actually, although not many people know it. Egyptians did have a desert hare goddess called Wenet, who was the goddess of the life-force and an assistant of Thoth, the god of writing. Rabbits, although in most medieval writings being portrayed as evil or cowardly has also been a symbol of the holy trinity! 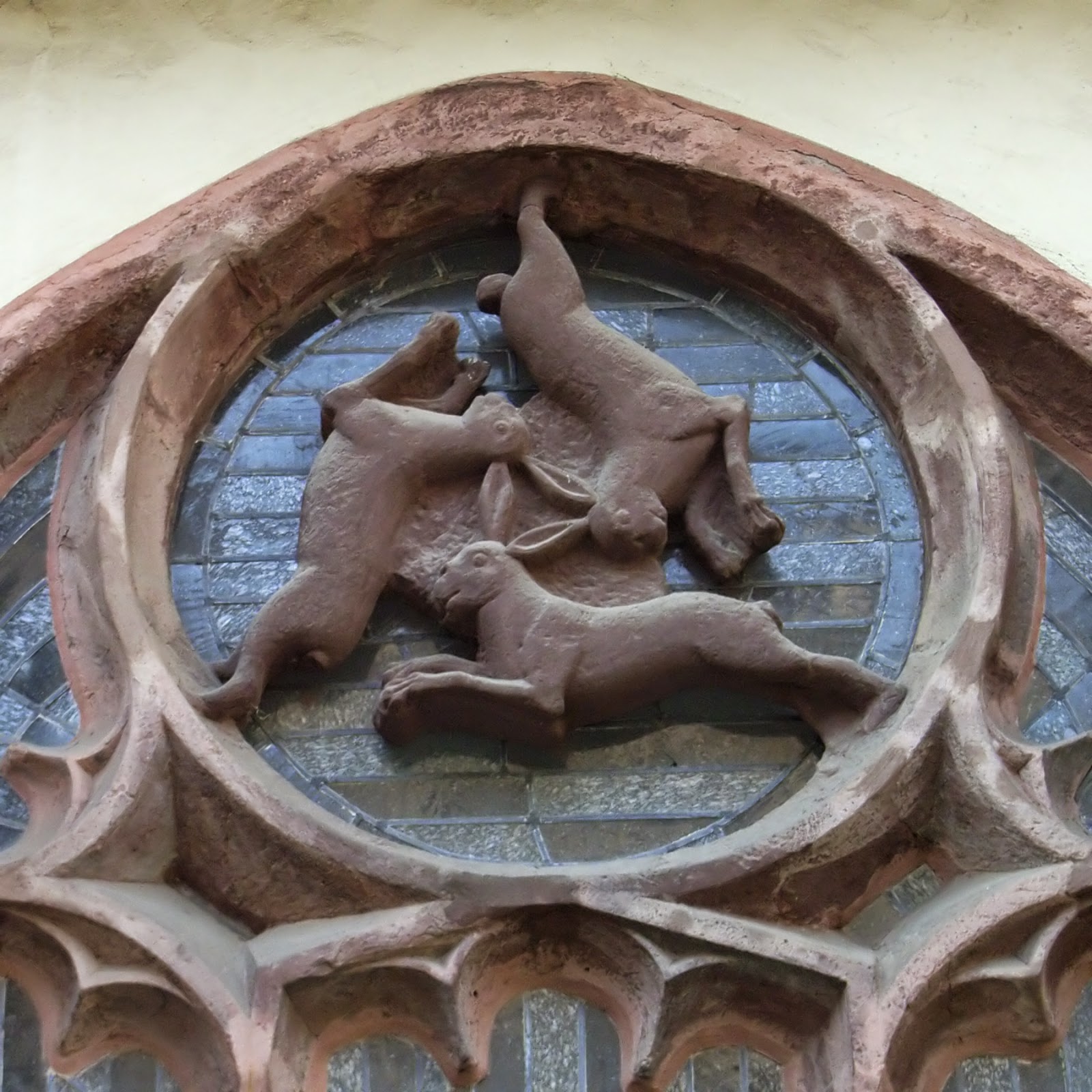 One example is this symbol with three hares sharing Three ears, is found mainly in Southern Great Britain.
The symbol of rabbits as the small and helpless being a strong multitude is very alluring to me. And naturally, the idea of animal-people works quite well with Egyptian gods, and prevents the controversy the use of humans may cause.

As for only trying to wrote female characters, I decided to do it because I am a social justice warrior, to create something original, so it is purely for "selfish reasons". It has gone better than I could ever anticipate, with only three out of about fifteen reoccurring characters being males. Main character Jane has grown from a somewhat bland viewpoint character to a person with her own set of skills and desires. As for other characters, at present Urminora and Jessica, along with Martha and Scrivens, seems to be the most popular. Least popular seems to be Gallinega and The Wright Lady.
Urminora I am very happy about, as she is my try at writing a stereotypical Russian characters in the same vein as Heavy Weapons Guy or Soda Popinski, only female. Jessica started out as a Captain America deconstruction, and an assistant to Urminora without that much to do. She, like Jane, has grown into her own character in a very dynamic way. She was the one that changed the most from my initial interpretation of the character. Martha and Scrivens are likewise characters close to my heart. Martha is actually recycled from an old comic-script of mine and Scrivens is from my last book, Digging Forth Today.
Finally, Gallinega and The Wright Lady were cool concepts, but did not see much use. Gallinega was my try at creating a mute character who fought with primitive weapons and were essentially a cavewoman. Perhaps I did not see much use for her in the story. Finally, The Wright Lady was sort of be a Moomin-style Hobgoblin (the rather hilariously bad translation for the character originally called Trollkarlen in Swedish) out of context character that pretty much clashes with everything else in the book. She was meant for a small role anyway, but as it is now she is nothing more than a cameo. 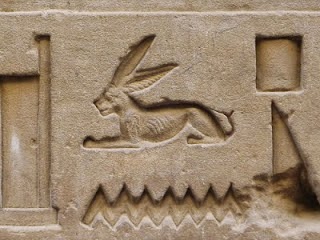 A rabbit (or more accurately, a desert hare) hieroglyph

The Ankh is another ancient Egyptian symbol that wanted to incorporate. In my story it is reinterpated (somewhat) as a set of keys which also ties into the Christian St Peter symbolism. Since the ankh symbol was somewhat preserved into the Coptic cross (although to my research this is somewhat debatle) it feels very appropriate.  The biggest change is a whole new chapter that takes place in the rabbit paradise of Tymor, before Jane becomes a jackalopes, in order to properly get a feel for what Jane is giving up for the sake of others and to make a parallel between the underworld and paradise. The paradise in jackalopes shouldn´t be mistaken for the Christian concept of heaven, being more like an earthly paradise mentioned in several religions. 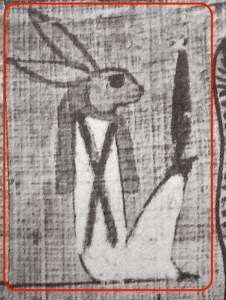