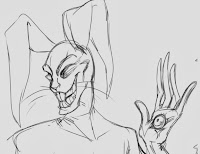 This is Tymor, the god of the rabbit people and the main character of the website Tymor the trickster. When writing about Tymor, it is the custom of the rabbits to use both male and female pronouns to describe their deity. Also known as The Silvercrowned One Tymor is the lord of the underworld and responsible for getting souls to paradise and avoid the dangers of hell and the demons therein. Tymor is a benevolent god, although one with a twisted sense of humor, taking out a ruthless revange on the enemies of the rabbit people. Tymor wears eyes on his hands, since Tymor ran away before her father could finish modeling Tymor out of clay. Hanging out with a group of devils in his youth, it was not until Tymor recieved eyes from Ray the fox god she could create the rabbit people and dig a tunnel to the underworld, taking it over from the demons. Tymor is playful and restless, always on the move and exploring the cosmos, bringing change both good and bad to one and all. While taking part in a race, Tymor met...

...Permeter The Windcrowned. Permeter is a huldra from western Scandinavia and the daughter of the god king Remagín and the Moon. Tymor and Permeter eventually married and she became the spirit of spring, also responsible for waking up the souls of the newly deceased. Before moving to live with Tymor, she ruled over the Woods Of Light, a great crossroads between all forests and a haven for its people and trolls. This place she still visits during the summer. Like Tymor she is jolly and playful but also have a darker side against those that do not show her the proper respect. Her greatest interest is insects. it is said that her eyes contains a secret of Life and Death...

The RED spy is a world-weary criminal who does the most dangerous work on the team, mostly because it is the only thing he is good at. As a result, he is a pretty heavy drinker. He hates that show-off spy on the other team, who is an actual spy and gets all the ladies and top-notch equipment from Spytech. Actually, he hopes to get off this line of work and return to his true dream; being a full time bum. 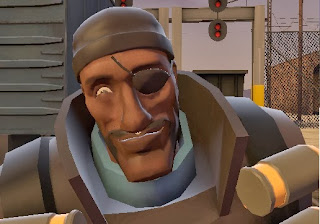 The BLU Demoman is a somewhat kindly, rambling drunk that really wishes everybody just could be friends. That said, he has no problem blowing people up for money; gotta fuel that alcohol addiction somehow! He is the only one on both team not being that disturbed by a giant Death-Bunny appearing in the midst of battle. It is probably just a hallucination, anyway. He claims to be Scottish, but seems a little bit too hatless for that... 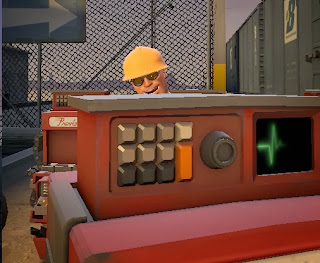 The BLU Enginner has come up with a fantastic plan to fool the RED team; paint all of his buildings red. The downside to this plan is that he can´t tell which Buildings are his, often repairing enemy dispensers and running straight into RED team sentries, thinking they are his own. But still, with the respawn everything seem to be working out just fine. ﻿ 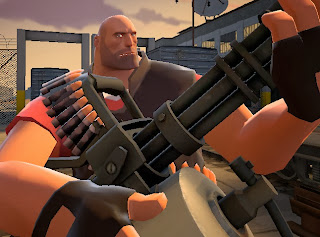 This giant of a man hails from Russia and works as a Heavy Weapons Guy for the RED team. He may seem slow, but is actually quite intelligent although he WILL kill you if you make him mad or take his food. He also refuses to learn capitalism worker-unfriendly western speak! It is rumoured that in his own language he is quite eloquent. He doesn´t really like the RED Medic and his methods, nor that creepy RED Engineer. 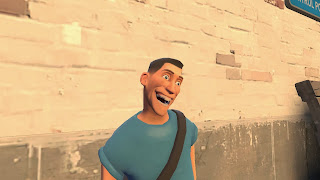 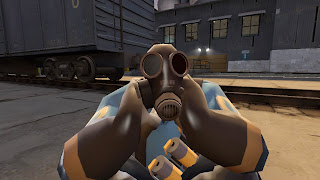 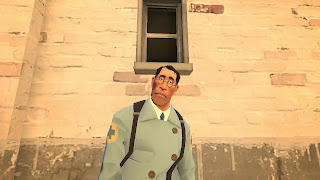 A somewhat fretful doctor who got his license in Germany during the second world war. Certain circumstances in the country forced him to leave the country as soon as possible. He moved to America, found work on the BLU team, and the rest is history. Little did he know, however, that his past would find him even in the Badlands...
Favorite person: Oskar Shindler ﻿ 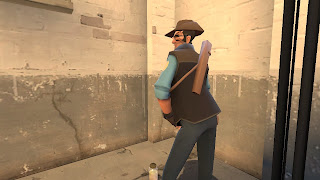 This perverted person managed to sneak into the BLU team, posing as a Sniper. His only real goal in Life, however, is to urinate on people, store his own pee in jars and shoot piss out of water squit guns. Yeah, he is pretty weird. He also has a magical knife that kills everybody that is fully drenched in his bodily fluids. No wonder the RED spy is so world-weary. This Sniper also makes sure to taunt after every kill he makes. 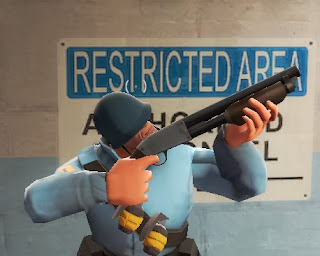 A man with no military training from the American Midwest. Though he wanted desperately to fight in World War 2, he was much to young at the time and thus rejected by every branch of the military. Undaunted, he taught himself how to load and fire a variety of weapons in order to fight in the great Gravel War of the Badlands. Do not ever call him crazy. Or a civilian. or present him to a ghost or a wizard. Never ever touch his skin! 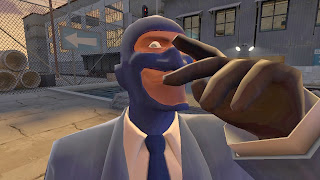 Here follows all the information we could find about the mysterious BLU spy (resulting in 8 dead people and about four of them not being found):
Name: [DATA REDACTED]
Age: [DATA EXPUNGED]
Occupation: Spy (BLU team)
Salary:[DATA CLASSIFIED]
Hobbies: Sleeping with your mother 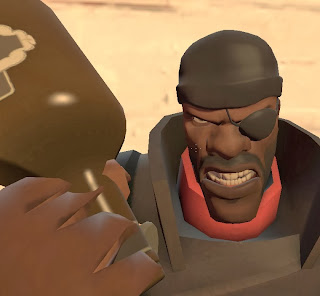 ﻿
This somewhat violent Scottish drunk hails from Ullapool and the famous Degroot clan, which have been demolition-men for centuries (however that works). In any case, he brings a mean bottle of scrumpy when he is drunk, explosions when he is sober and a lot of British swears at all times! Since comin to the Badlands he has probably been responsible for the most deaths and destruction, but also killed himself the most times with his own bombs, so it adds up. 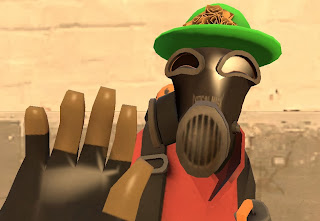 At first glance this seems to be pretty much a mirror of the BLU Pyro, but the mask of this person is much more expressive. Who could move a rubber mask like that, and what could it mean? Who is really underneath? All we know is that it enjoys fire, tacky hats and making people happy. And dead. Pretty much the same as the BLU Pyro then, only red. RED Pyro is somewhat pissed off that the Meet The Pyro film is so short.﻿ 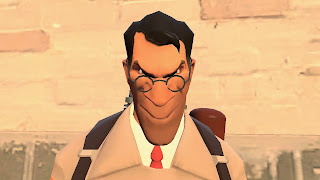 A somewhat crazed doctor who got his license in Germany during the second world war. Certain circumstances after the war ended forced him to leave the country as soon as possible. He moved to America, found work on the RED team, and the rest is history. Little did he know, however, that his past would find him even in the Badlands...
Favorite person: Otto Skorzeny 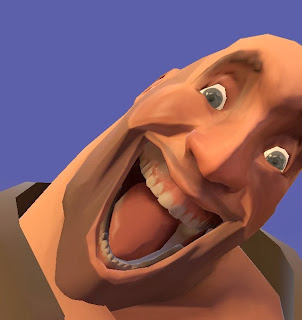 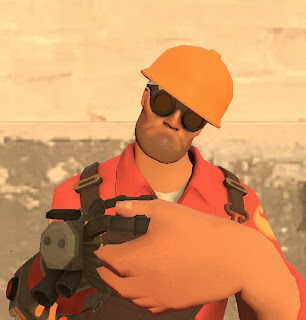 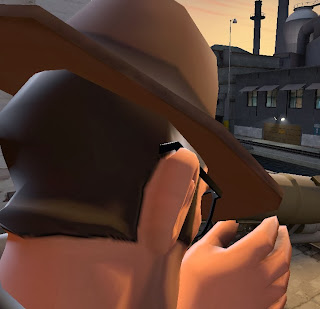 The professional Sniper on the RED team is a real pro. He only headshots, uses the razorback in comp and always gets kritz on his kukri. He often tries to go pubstomping, but since all public servers always already have 4-5 snipers and he really cannot/is not willing to play anything else he is just another burden to the team. He hates to be confused with that crude BLU Sniper, but to be fair, they do look kind of similiar. 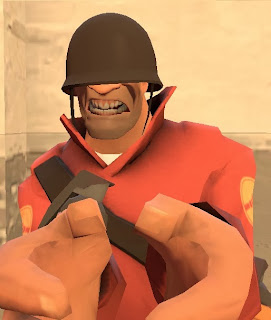 This is one crAAAAAAzy Soldier
He will eat YOU
>:D 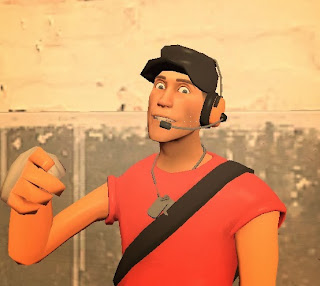 This streetwise kid is the oldest brother of the BLU Scout and also the favorite son of their mother. While he doesn´t really appreciate that the BLU Spy is sleeping with his mother, he does recognize and respect the fact that she has been very lonely since his father disappeared. RED Scout sees himself as something of a team leader, and he fits the role well.
Scratch that, this is probably the most immature person alive.
﻿
Upplagd av Erik Engström kl. 14:05 Inga kommentarer: