I dont think I have written fanfiction since I was like twelve, but Armello actually made me do it. Enjoy this little piece I posted on their forum, which has unfortunately been closed down. 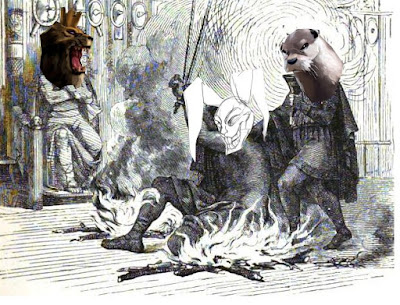 Original myth do not steal

Okay, so this one probably bears some explaining. The general setting of Armello has always reminded me of the tale from norse mythology called Grimnismal. In it, a king is chosen by Odin to rule but turns out to be not so suited for the job. Instead, a kid that shows kindness to the disguised Odin gets the throne. The bulk of the poem is a presentation of people and places from norse myth to benefit the new king. One day I got it into my head to write an “Armellian” version, so to speak. The main problem was who to use for the Odin role (as well as the role of his wife Frigg). In the end I ended up using my own character for the job. And so I present to you, the Armellian Grimnismal! I have done my best to pay homage to the writing-style and meter of the original tale while at the same time working in as many Armello references as possible.

There were two cubs, one a lion and one a otter. The otter was ten years old but the lion eight. Once they went out fishing, hoping to catch the fabled rainbow-fish, which would signify the coming of a true king. While they were fishing two rabbit peasants came up to them. One of them were an old thin man with a bent back and a wide grin and the other a hefty mistress with hair down to her belly. The thin man spoke with the lion and advised him on his fishing and the peasant woman did the same for the otter. Suddenly the otter felt a thug and it was the rainbow fish. He struggled mightily as the river grew fiercer and hotter from the struggle. Seeing that the otter had almost pulled the fish ashore the lion pushed him into the water so that the river carried him away. "Go where the Banes may take you" the lion shouted. He turned around but the peasant couple was gone. The lion returned and later became the king of Armello and a man of great renown.

Tymor and Permeter were sitting on the moon and looked upon the world. Tymor said: "See how your champion lives among bandits and thieves while mine is a king and rules over many clans?" Permeter responded: "He is so mad from the rot that he tortures and kills innocent beggars if he suspects there is a thief among them". Tymor said that it was the greatest lie and they made a bet about this matter. Tymor disguised himself as a dirty stranger and entered the capital where the king´s guards captured him. He was placed upon on a log and the king´s sorcerers cast immolation on both ends. There the stranger was questioned by the king for nine days and nights but said nothing. The following night the king was busy talking with his trusted steward. A boy called Sylas, son of the otter, came and gave the stranger a drink of wyldsap. He said it was a foul deed to torture the stranger without any reason. The stranger had now sat on the log for so long that the fire burned the purple mantle on his back.
Tymor spake:Hot are you fire, too fierce by farToo hot for a stranger to bearAt my back the cottontail is smoteAt my front the huldra´s joy is fast catching flames!I sat between fires, for nine night and daysNo meat, no mead was I givenSave Sylas alone, so alone shall he ruleOver the clans and towns of ArmelloGlory to your name, Sylas, hailed you areBy the god of tricks and trapsFor a single drink you will never getA greater gift than I offerThe lands to the north, that lies far awaySnow and wolf live togetherAnd Thane´s descandents shall ever there dwellAs long as Armello standsGreenguard is the valley whereElyssa a hall has setAnd in Shamrock fields, Brun receivedHis scars of ancient timesAn old ruin I see, a bluish hueAlthough only a circle remainsHere Sana was given, by the mighty stag godThe blue stones of  prophecyThe rat clan city stands well tallAmid the murmurs and lofty wavesThere daily does Mecurio, with bags of goldIn gladness drink his wineIn Magna´s home, the iron shieldThe tables stretches farThere does the mistress, every daySew a belt from foxes she´s slainIt is easy to know for those that searchesWhen you are at her houseThe roof is made from shields, all are brightOn the benches chainmails are strewnIt is easy to know for those that searchesWhen you are at her houseThe sign of the wolf hangs over the doorAnd above a eagle fliesAlso there is River´s homeThe wolf of marvelous mightNow she lives, the bow-maiden fairIn the home that her father had. In the ruins of blackspire, I verily seeA form I find most foulSargon knows and sees very farBut his destiny is far from sorrow-freeIn the smithy and mines of the warrenWhere the industrious rabbits hold swayIn well-built armor, Barnaby gladLet his hammer clink and clangIn the same city Amber sits and collectsThe treasures and followers she haveHalf of the stones, the blue precious stonesOf which Sana has but twoIn the capital, the beggers and thievesAre hidden beneath the streetsHere all her days, do Twiss dwellAs master of the guildInto the woods, here is Horace´s homeDeep among roses and thornsThe mighty man here he sitsHis words given heed by allThe waters run grey and the high-standing grassBlows as the whirwind Zosha whirls byBut the words of her mistress she will not heedWhen she has taken the throneIn Arcdale Woods and Blueberry townThe very best food is madeScarlet knows what few men doWhere the best fare may be hadThe mighty mistress, the thieves heedThe famed bandit king of oldThe weapon-decked bandit clan, knows and sees allAbout what the king may doTwiss and Horace she sends every dayEvery day they set forthScarlet worries that the poet will not returnBut for Twiss she worries moreLoud roars the river when Ghor transformsJoy flows into the woodsHard does his back seems as he rollsTo wade the torrent wildHere is rot´s bog , the darkest of gateUnder it are dungeons deepOld is the gate, old are the roadsBut the darkness is tightly lockedFive hundred doors  and forty there are,I think, in Adventurer´s TombEight hundred guard will a single bane fightWhen Armello to doom must goFive hundred rooms  and forty there areI think, in the castle built;Of all the homes  whose roofs I see from the moonTis one the greatest, I deemThe underground roads, the rivers blackUnderneath the world they runOver one festers banes, over one is ArmelloOver the last lies the gods own landMore banes there are, in the underwyrmThan an brilliant fool could countAll shall ever, as long as I knowGnaw the roots of the worldThey suffer more evil, uncountables blowsFar more than men do knowStrive is among men, the gods are unjustAnd banes do gnaw beneathThe best of kingdoms must Armello beTeleport best of spellsOf all the followers, apprentice is bestAnd thorns the best of gamesMercurio of rats, Rivers own bowScarlet of bandits and Pride´s Edge of swordsYou are drunk, oh king. Drunk of the hot rot wineMuch have you lost for no more helpWill you get from the heroes´ clansYou listened not to my advice, all that I toldFalse are the words of your friendsAll around you, usurpers are theyHoping to wet their swordsYour rotten body shall the banes haveFor your days are numbered and goneAll are hostile, even ICome at us, if you can!

When the king heard this he took his sword to slay Sylas and Tymor but as dawn approached the rot took his body and he fell down dead. Tymor immediately disappeared and Sylas was credited for killing the mad king. He grew up and ruled wisely for many years.
Upplagd av Erik Engström kl. 11:57